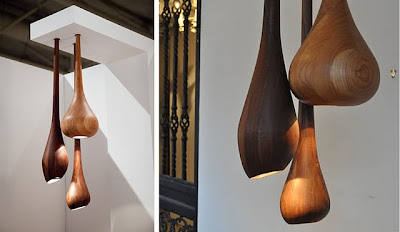 Aren't these the most beautiful pendant lights you have ever seen??

It makes me want to take that woodturning class at VisArts just to make some for myself!

They are created by the Carroll Street Woodworkers in Toronto.
Posted by Unknown at 1:04 PM 1 comment:

We have this funny little cubby in our kitchen cabinet that would be perfect for cookbooks or to an in-cabinet wine rack. HOWEVER, when we moved in, it became a dumping ground for all things that we didn't know what to do with. THEN it became wine glass storage. (Please don't ask about the moose on the fridge, k? k.) OH, BTW you can see our nasty old counter tops and ugly cabinet hardware LOUD and CLEAR here, right? 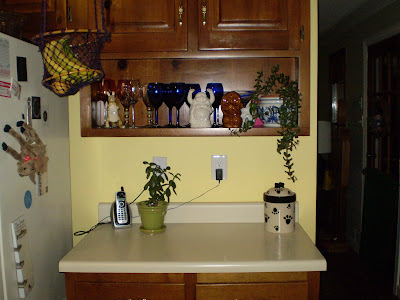 We picked up 3 of these under-counter stemware racks from Bed, Bath & Beyond for about $5.00 each... 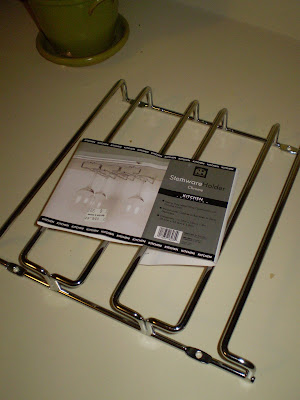 Then I watched as my husband contorted himself into a pretzel in order to drill pilot holes... 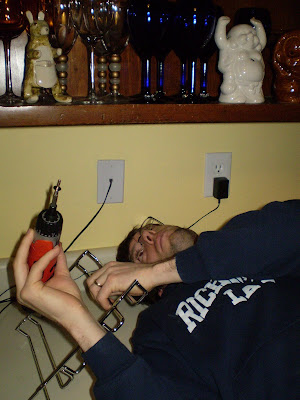 Installed--you can't see them at all from standing! 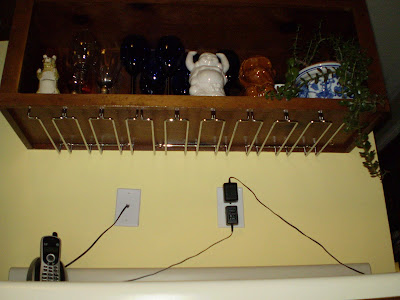 Look how much extra storage we have now! The stemware is out of the way, we can use the counterspace, and our most-often-used cookbooks are at our fingertips rather than in the bookcase in the dining room. 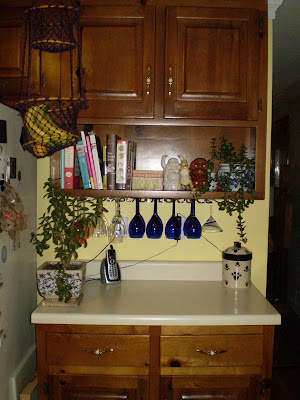 Easy fix, I recommend it highly. This probably took us all of a half hour to install, and it was SO worth it!

Posted by Unknown at 1:49 PM No comments:

I NEED my old couch to look like this!

Some of you may remember a loooooong time ago, I posted about an old couch I want to reupolster. Here she is: 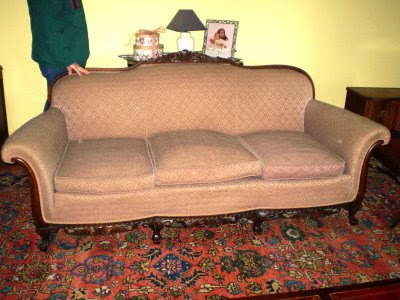 I saw a similar couch in an old domino magazine that the editor had hauled back all the way from a Paris flee market! I don't know if you can see the pretty carvings along the bottom, but trust me: she has good bones.

Low and behold, I came across this photo on Design Sponge, and my heart all but stopped beating... 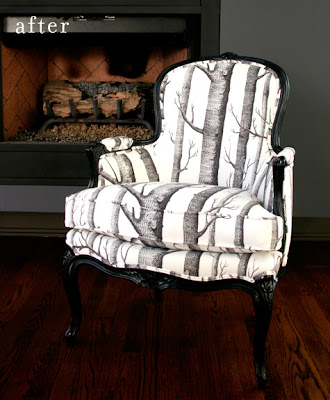 The fabric is Cole & Sons' "Woods," which is also available as wallpaper in a bunch of colorways. I neeeeed my couch to look this beautiful. Glossy black oil paint on the wood trim, sophisticated Walden Pond on the cushions. I would love it forever! Now, where can I get that fabric and how much is it going to cost me???
Posted by Unknown at 1:05 PM 4 comments:

We are going to update our kitchen--I hesitate to say "renovate" since we aren't tearing down walls and are keeping quite a bit as is. I don't actually know how this happened...my normally frugal husband actually got the ball rolling (whaaaa???), and I am not one to argue! I don't want to take any pictures yet, because we have only just gotten started, but here is a sneak peak!

This is the lovely new range that replaced our 25 year-old bisque one. Our old oven didn't really broil as much as set off all the smoke detectors in the house, and it had old electric heating elements that were a real pain to keep clean. I am SOOOO looking forward to this spill-proof ceramic top. It also has a warming burner and a quick boil burner. 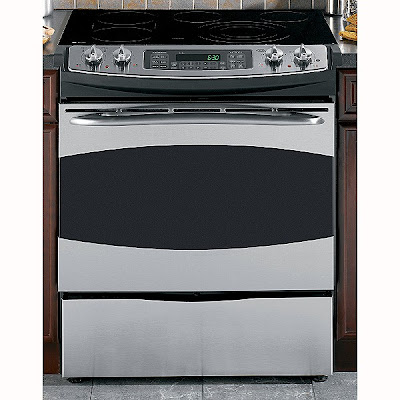 Here is our new dishwasher!!!! I think it looks kind of like a spaceship. It actually cleans the dishes, is quiet, and has its own built-in disposal. Did I mention it is shiny? 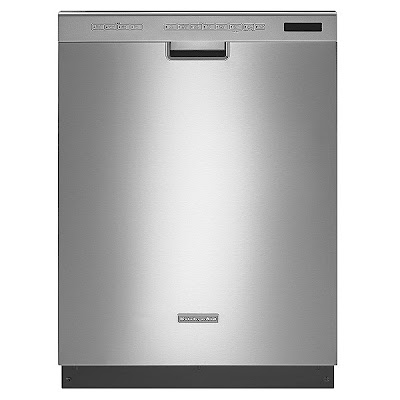 So we have installed the dishwasher and oven/range, but everything else is the same right now. I like to say our appliances look like the Jetsons and the rest of the kitchen still looks like the Brady Bunch. :-)

And here is the BEAUTIFUL new granite countertops we have ordered! They called to say they have started fabricating it, but we don't know yet when it will come in. I am personally quite excited about doing the demo on our old counters which are stained and also "bisque." Once we get the new countertop installed, then I am going to take a long hard look at our cabinets and decide whether they just need new handles, or whether I want to paint them a clean and glossy white. We are for SURE getting new pulls though, as the ones we have are HIDEOUS. *shudder* I have already started taking the old ones off, and I like the cabinets much more already.

More kitchen updates as they come!

So there has been much in blogland about DIY roman blinds made from mini-blinds; Newlywed Diaries, Little Green Notebook, and Craftzine all have great tutorials. I think that is a fabulous idea, and fully intend to try it, but sometimes you've gotta work with what you've got. Which is not mini blinds.

When we moved into the house, the previous owners left the window treatments. Unfortunately the kitchen and dining room were both country/burgandy themed, and as a BRIGHTS person, I just couldn't deal for more than a moment or two with the unbleached-and-burgandy gingham roman blinds in my kitchen breakfast nook. 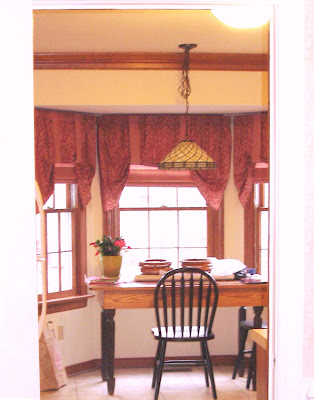 The kitchen desperately needed something to shield us from the neighbors and insulate our single-paned windows, so just taking them down wasn't an option. After noticing that the gingham blinds looked like they were homemade, I decided to dismantle them and use them as a pattern for my own.

I found some tablecloths, placemats, and napkins I really liked at Marshall's, and bought enough of the table clothes to make 4 roman blinds.

***ASIDE: I know, I know, I LOVE matchy sometimes, but I just can't help it! I blame mom for the Kelly's Kids clothes she forced me into at a young age: no matter how much I hated it, apparently it made some impression on my developing grey matter!***

Well I layed them out in the dining room and cut the tableclothes slightly larger than the blinds. Then I realized that I would probably need some kind of backing fabric, so I cut an old sheet to use as my backing and sewed it to the tablecloth fabric. Then I realized I probably didn't even need to take the existing blinds apart as I had planned--I just folded over the raw edges and sewed the backed tablecloth fabric AROUND the fugly gingham! I then ran my machine down the center of the blinds a couple of times so that the fabric wouldn't bunch up when the cord was pulled and VOILA! Brand new custom blinds! 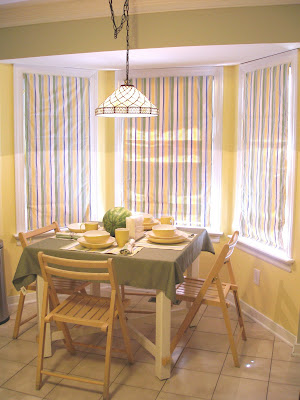 I think they go swimmingly with my yellow Kate Spade discontinued pattern, don't you?? It just makes me so happy to be in this space...I try to keep the table set so that Brett and I don't use it for a mail dumping station, etc. 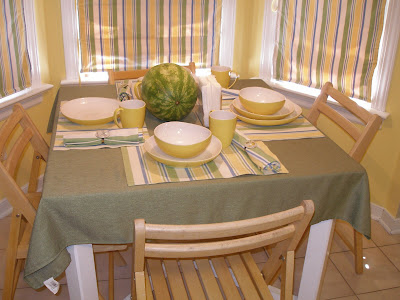 The kitchen and the family room are the most often used rooms in our house, so I am really really happy to have them both made over to our specifications.

There are more big plans for our kitchen coming up soon, so stay tuned...
Posted by Unknown at 3:58 AM 1 comment: 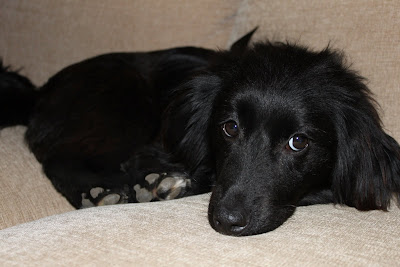 He's the brand new addition to our family! We adopted him from Henrico Humane Society last weekend after fostering him for a couple of weeks to make sure he got along with Lolly.

We know a little more about him than we did about Lolly when we got her from Nicholas County Animal Shelter in West Virginia. Here's Mack's story:

Mack is from Scott County, Virginia. He was one of 10 doggies confiscated by the local pound from an animal hoarder. He was taken to the Scott County animal shelter, which soon afterward decided to renovate. Since it was a kill shelter, they were going to just euthanize all the dogs before the renovation.

Luckily for Mack, Henrico Humane stepped in, and one of their fosters, Lori, took in Mack and 2 of his buddies. They named him MacDougal, but we shortened it since he is such a little guy! He loved playing with the goats and horses at Lori's but she decided to foster him out so he could get socialized with people and overcome his shyness.

Unfortunately his foster family lost him when his leash broke, and he was running alone all over Interstate 64 in the Richmond area for several days! The rescue community rallied and they were able to catch him and bring him home just before new years. He went back to Lori's, and then we met him and fell in love. 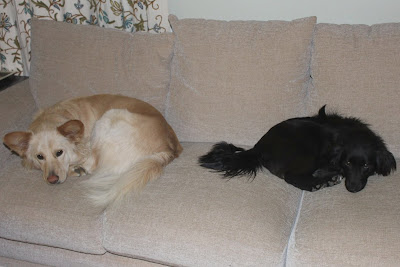 He is a super sweet little boy who loves to cuddle and lets his big sister bully him with good humor. We are working on teaching him his name, wearing a leash, and just getting him used to human contact! We learned last night that he has a heart murmur, so wish us luck when he gets his heart imaged soon. Keep your fingers crossed that it is manageable.